It is considered to be one of the most noble fish found in Poland. Zander meat is very delicate, firm, white and has a slightly buttery flavor. It is usually fried as fish steaks or as a fillet in order to make it juicy with crispy skin. It is also perfect for baking whole in the oven or steaming. 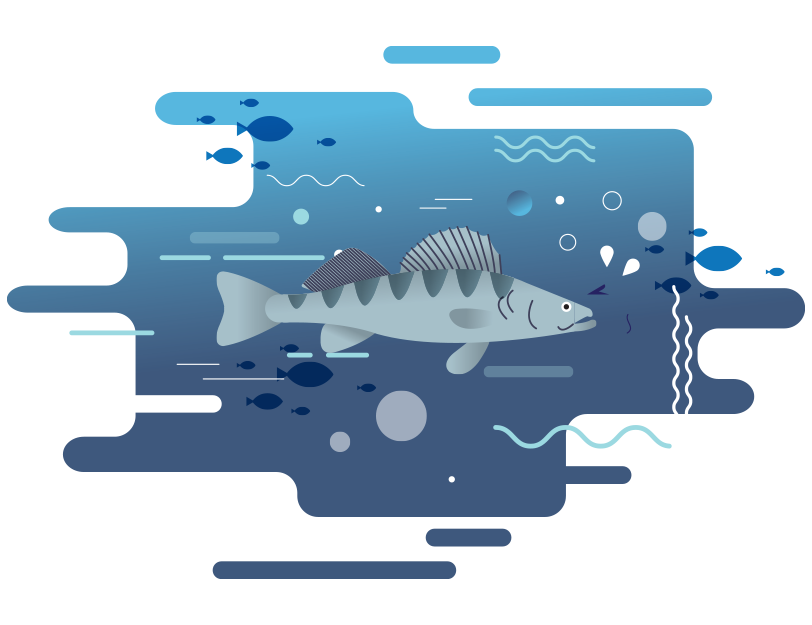 Zander is the largest fish of the perch family in Europe. It is a freshwater fish, but in Poland, apart from lakes and lower river banks, it is also found in the basins of the Baltic Sea. It has an elongated body, slightly laterally flattened, relatively small head and strongly toothed mouth. It is because of its characteristic fangs that anglers often call it a vampire.

The color of the back varies from gray-green to gray-brown, the sides of the fish are bright, silvery-green, with 8-12 dark streaks often smearing into spots, the belly is white. Zander has large eyes, iridescent, glowing in the dark, peculiarly cloudy, opaque. Hence another nickname - "cloudy-eyed" and a saying that a fish with "cloudy" eyes likes "cloudy" water. In fact, zander prefers deep, turbid waters with muddy bottom. It grows up to 70-85 cm, maximum 130 cm, and reaches 8-12 kg body weight. It sees well in the dark. It is a predator, and when chasing its prey it can reach a speed of up to 30 km/h.

Zander is considered a very tasty and noble fish today. However, it occupied a special place in the old Polish cuisine. In the eighteenth century in Poland it was said that for every two fish dishes, one must be made from zander. In the most popular and frequently reprinted Polish cook book by Lucyna Ćwierczakiewiczowa, titled "365 obiadów" ("365 Dinners"), first published in 1860, there are as many as 13 dishes involving zander: whole zander, zander with sauce, zander mayonnaise, Vol au vent with zander, zander in white mayonnaise, zander galantine, zander with eggs, zander in Parisian style, zander in dill sauce, zander with crayfish butter, fried zander, Turkish-style zander, and zander a la maitre d'hotel.

Zander, along with a knife, also played a major role in the scene mocking the elite's excessive attachment to the rules of savoir-vivre in "Lalka" by Boleslaw Prus. According to the etiquette, a fish should not be cut with a knife, but it should be portioned with a fish fork, only using a knife in order to help oneself when putting it on. Meanwhile, in this most important nineteenth-century Polish novel, "a zander was served, which Wokulski attacked with a knife and fork. Miss Florentyna nearly fainted, Miss Izabela looked on (...) with indulgent pity, and Mr. Tomasz... also began to eat the zander with a knife and fork. (...)". :

What matters most is to eat zander the way you like it. It can be served with cream, herbs, tomatoes, mushroom sauce, jelly, etc. It is equally suitable for barbecue and fish soup. It will go well with mashed potatoes, as well as with groats or rice. You can also approach the subject as recommended by Maria Lemnis and Henryk Vitry in "W staropolskiej kuchni i przy polskim stole" ("In Old Polish Kitchen and at the Polish Table")simply boil it in water. The authors say: "it is, according to experts, the most appropriate way to serve zander, emphasizing the exquisite taste and aroma of this noble fish."

Zanders are characterized by delicate, juicy and almost boneless meat with a low fat content, with only 0.7 g of fat in 100 grams of meat. Thus, it is low in calories - 83kcal/100g. At the same time, it is an excellent source of complete protein, containing all essential exogenous amino acids. In 100 grams of zander there is as much as 19.1 g of said protein. Zander also provides vitamin B12, vitamins D and E. Apart from that, the meat is rich in phosphorus, calcium and fluorine, which have a positive effect on the condition of the bone tissue, potassium and magnesium, which strengthen the heart muscle and the walls of blood vessels, as well as iodine and selenium, which support the proper functioning of the thyroid gland.