Eating flounder requires some patience as its meat is quite bony. It rewards the effort with its juiciness and delicate, buttery taste. Flounder tastes equally good served whole with a delicious sauce and as a delicate fillet with salad. It is in these forms that it is most often sought after by the lovers of Baltic fryeries. 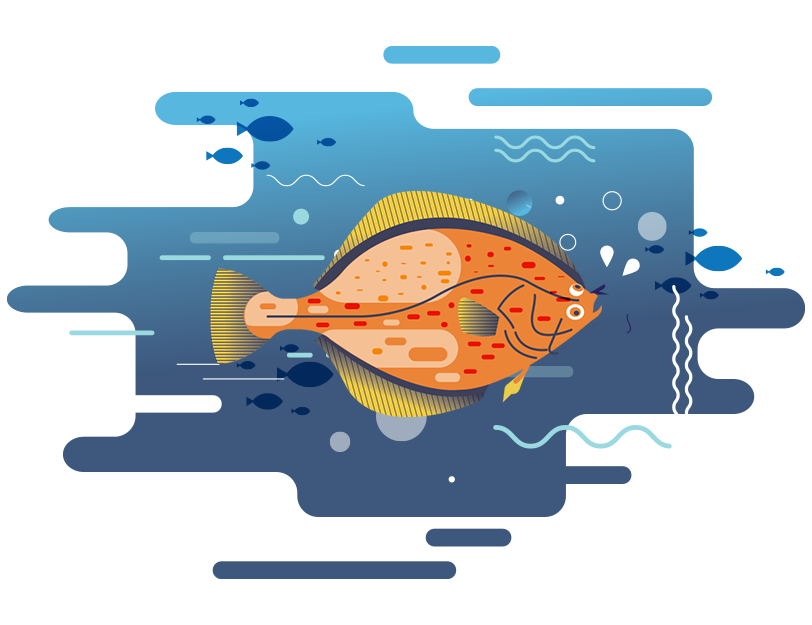 The leading Polish aphorist Stanisław Jerzy Lec wrote that "even a flounder is not impartial", in which he referred to its structure and jokingly admitted the right to an opinion, although supposedly "fish have no voice". In fact, the flounder is a fish with an asymmetrical body structure. Most of the time it rests on the seabed, buried in the mud, lying on its side. In this position it also moves, which causes one of its eyes to be displaced to the opposite side of its head, usually the right side. However, there are also flounders with a pair of eyes on the left side. The colour of the eye side, which is, as we have already established, usually right, is dark brown or dark green, and the other side, which is actually the underside, is white.

The body of the stronghold is covered with tiny multicoloured scales, some of which are transformed into rough, bony plates, particularly sharp along the lateral line and at the base of the dorsal fin. Flounder feed intensively after dark. In the Polish part of the Baltic Sea they grow up to 40 cm, exceptionally they reach the length of 50 cm.

In the kitchen, flounder is usually served with boiled potatoes or Chips and a salad of white or sauerkraut. The simplest and most popular way of preparing flounder is... frying. All you need to do is dry the fish, sprinkle it with lemon, sprinkle with salt and freshly ground white pepper, sprinkle with flour and place in a heated frying pan. It's a good idea to cut off the side fins before frying. This way, when the fish shrinks during frying, some of the bones will come out. It is more convenient to eat the fish prepared this way.

Flanders also taste delicious baked in the oven and boiled. You can put it in boiling vegetable stock (with lots of onion), a mixture of water and white wine, water and milk, or even just wine. You can also add dried mushrooms, garlic crushed with salt, sugar, lemon slices, peppercorns, dill, marjoram and other spices to the stock. It all depends on your taste and culinary concept. It is worth using the cooking liquid to make a sauce later on.

The meat of flounder is very juicy and tender. It has a characteristic buttery, slightly sweet taste. What is very important, it is low in calories. 100 g of such a dish is approximately 80 kcal. At the same time, 100 g of flounder provides more than 16 g of easily digestible, wholesome protein. Moreover, it contains little cholesterol (58 mg/100g). It is an excellent source of many valuable vitamins, including those soluble in fats - A, D, E. Flounder is also a source of vitamin B12, which affects the proper functioning of the nervous system and participates in the production of red blood cells in the bone marrow. It is also worth eating because of the content of vitamin B6, niacin, significant amounts of folates and minerals such as selenium, phosphorus, calcium and magnesium.

Check out the flądrę recipes