Among many cooks and lovers of delicious food, it is considered a real Baltic delicacy. Due to its taste, it is one of the most valued fish on the culinary map of Europe. Almost its mere presence on the plate turns a meal into an extraordinary feast. 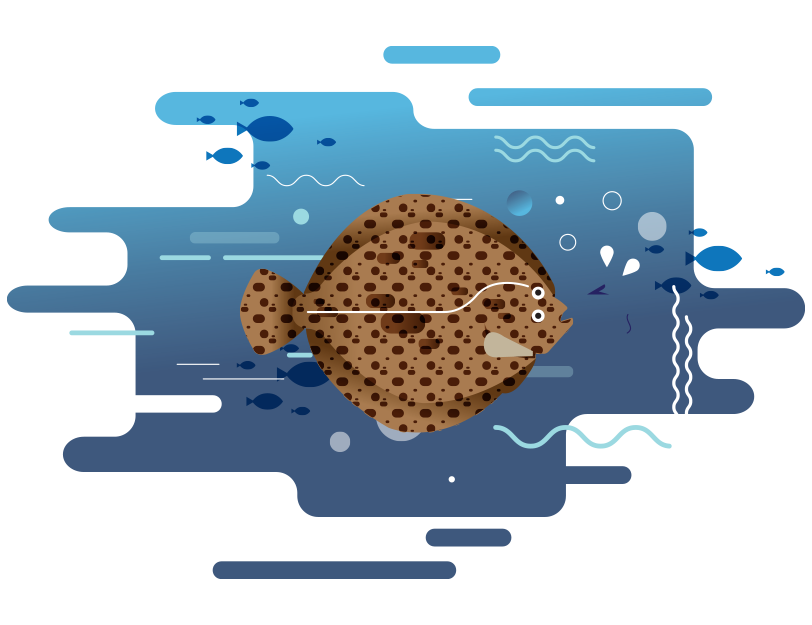 Turbot is also called brat, breet, britt, or butt. It is found mainly in the Polish part of the Baltic Sea. It swims on its side, close to the bottom of the sea. Like other Baltic fish, European plaice and flounder, it belongs to the ray-finned demersal fish order, also known as flatfish. It differs from flounder mainly by its more oval, almost circular shape. The body of the turbot is strongly laterally flattened, covered with hard bone nodules. The eyes are located on the left side of the body. Its color can change depending on the substrate sea floor, this is how the fish camouflages itself. The color ranges from gray to dark brown with numerous black dots. The underside (right side) of the body, on the other hand, is light. Turbots reach various sizes. In the Baltic Sea they grow up to about 55 cm. They are predators, eating mainly small fish.

The meat of turbot is white, firm and juicy, and its taste is very delicate. This is why it is often considered a noble fish. For example, it used to be served together with oysters at prestigious Nobel banquets. The way of preparing turbot is also widely described in a famous book by Günter Grass entitled after the name of the fish: "eleven specimens of two to four kilograms each (...) were promptly fried in tarragon butter, poured with white wine, stewed in a hearty stock over low heat, seasoned with dill and capers, and finally with roe and milt, which in June in the nodular turbot are sometimes large, arranged on heated platters (...) with boiled potatoes and a cucumber salad".

What's interesting is that in the original German version of Günter Grass' book, it is titled "Der Butt" and it refers to the famous fairy tale by the Brothers Grimm, "The Fisherman and His Wife" written in 1812. In the book, the famous goldfish appears as "der Butt," meaning turbot. So can turbot make wishes come true? We do not know, but it can certainly fulfill many culinary desires.

The delicate taste of turbot goes well with all kinds of seafood. It goes well with vivid scallops, mussels, clams or even prawns. However, it does not require a sumptuous setting and advanced culinary skills. Turbot tastes great simply fried with a little olive oil and lemon juice. Herbal butter will also make a tasty addition, with thyme or garlic, for example. Turbot should be fried briefly, a few minutes on each side, carefully turning it over in the pan. It can also be prepared in other ways: stewed, grilled or baked.

100 g of turbot meat contains only 95 kcal. At the same time it provides over 16 g of easily digestible, wholesome protein. Despite the fact that it is classified as moderately oily fish (fat content of about 3%), it contains omega-3 and omega-6 fatty acids from the family of essential unsaturated fatty acids (EFAs), which are important for the body. It is also an excellent source of macro- and microelements, including selenium, which has anti-inflammatory properties and is recommended for arthritis. Turbot is a source of valuable vitamins A, E, C and D, and B12.

Check out the turbota recipes