Respected by anglers for its cleverness and agile movements. Trying to free itself from the hook, it often jumps above the water. It is valued by cooks mainly for its lean and firm meat. Due to its delicate taste, it is best to be careful not to oversalt it. Then it may become bitter. 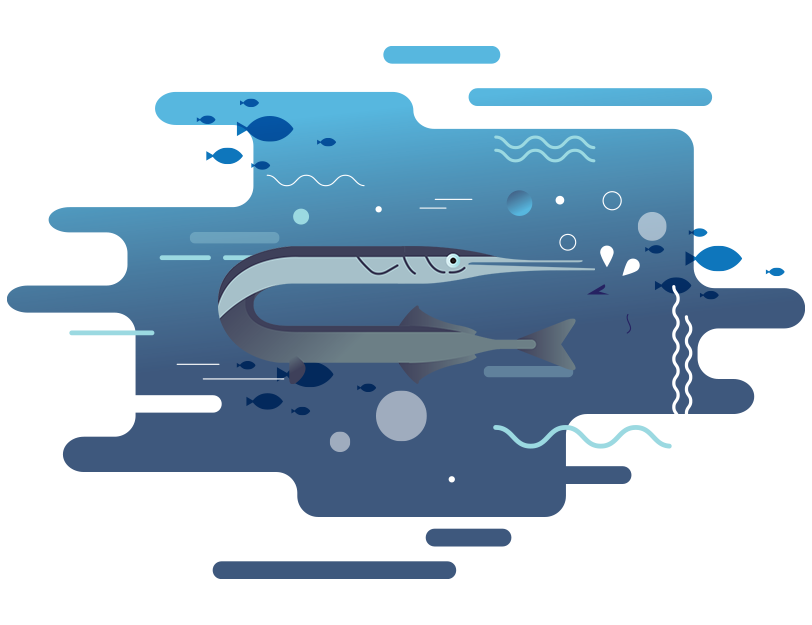 Belona - Stork of the Baltic

The beluga has a strongly elongated body with an arrow-like shape and an elongated mouth with a pointed beak. For this reason it is jokingly called the sea stork. It is also closely related to flying fish. It can jump above the surface of the water to escape or attack. It reaches a length of 60 to 100 cm and weighs up to 1 kg. Its back is dark blue or dark green, its sides are silver and shiny and its belly is white with a yellow sheen.

Belon can be found in the shallow coastal waters of the southern Baltic, in the north it occurs sporadically. It appears in the Baltic Sea only for spawning between May and July. For most of the year it travels very far in search of food, which is similar to mackerel.

One of its favourite spawning grounds are the waters of the Bay of Puck. Every year in mid-May, it is in Puck where the Belonada takes place - a spectacular beluga fishing competition and associated culinary events. In local fryeries and restaurants you can try this very seasonal fish.

The meat of the belon is tender and low in fat. Interestingly, the bones of belon have a greenish colour even after frying. It is caused by biliverdin, a natural pigment found in the fish's body. Thanks to that it is easy to fillet, which can be very helpful when preparing fish dishes for children. Belona is most often served fried or baked. It is also perfect for smoking and grilling.

Belon has compact and firm meat. It equals eel in flavour, but is more tender due to its lower fat content. It is a source of complete protein (over 20%), containing all essential amino acids. It provides polyunsaturated fats from the omega-3 family, which support the proper functioning of the nervous system. It is also a source of vitamins important for our body, especially group A and D. Vitamin A is crucial for maintaining good eyesight, it also strengthens the immune system and is responsible for good skin condition. In turn, vitamin D allows for the maintenance of normal calcium-phosphate metabolism, and thus participates in the construction and functioning of bone tissue. Moreover, it regulates the immune response, which contributes to strengthening the body's immunity.& nbsp;