Cod meat is white, juicy, delicate, with a mild, sweet taste, with not many bones. The Portuguese claim that from a dried and salted cod (called bacalhau) one can create a different recipe for each day of the year. And yet it can also be fried, grilled, baked, cooked by steaming, and even raw in the form of tartare. Thus, the possibilities become almost endless... 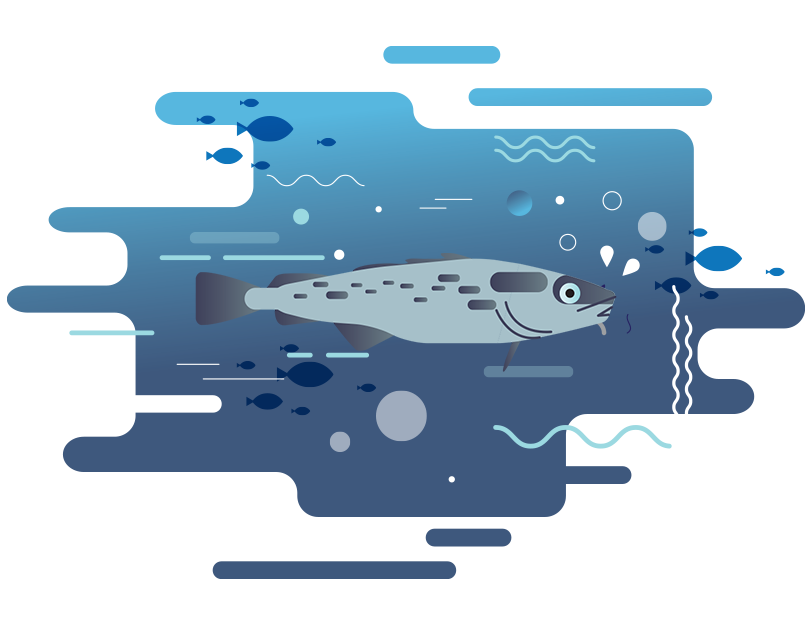 To begin with, let us clarify the nomenclature itself, as it is quite complex. Cod, also called livers, is the common name for Atlantic cod (Gadus morhua) and several subspecies. These are: "typical" cod (G adus morhua morhua), the very rare Kilda cod ( Gadus morhua kildinensis) occurring only in one place on earth - in a small lake Mogilnoje on the island of Kildin, and finally Baltic cod (Gadus morhua callarias) from Kashubian also called pomuchla.

Baltic cod grows to 70 cm and is slightly smaller than its Atlantic relative. There are two cod stocks in the Baltic Sea. The smaller so-called "western" stock is found in the Arkona Basin and in the area from the Danish Straits to around Bornholm, where it meets the "eastern" stock which reaches as far as the Gulf of Bothnia.

Dorsz is a predatory fish. It is characterised by a large head and a fleshy whisker on the chin. It has an elongated body, oval in cross-section and slightly flattened laterally in the tail section.

In the famous "Iskier Guide to the Culinary Arts" published in the 1970s, authors Maria Lemnis and Henryk Vitry claimed that cod is almost the tastiest of Polish fish "when prepared with care and imagination, not only in the form of breaded, fried cutlets". It is only fantasy that limits us when preparing cod dishes. Suffice it to say that some Portuguese believe that their national dish, bacalhau, or dried and salted cod, can be prepared in 365 different ways - for every day of the year. Other Portuguese call them sceptics and claim that there are at least 1000 different recipes...

However, we will not go into an exact verification of these calculations now. We will only remind you that cod can still be fried, baked, grilled and steamed. During processing, it is worth leaving the skin, which binds the flakes of meat together and protects them from falling apart. If this is still not enough for you, you can use raw sirloin and after adding lemon juice, a pinch of coriander, salt and pepper, prepare an appetizer in the form of tartare. It's worth remembering that cod meat is delicate and not to overdo it with spicy ingredients, which could completely cover its flavour.

Cod meat is characterised by its white colour and is very tender. It is an extremely lean fish (less than 1% fat). Therefore, it provides few calories, in 100 g there are only about 80 kcal. At the same time, cod is a great source of perfectly digestible and wholesome protein, with almost 18 g of it in 100 g of meat. For physically active people, cod may be an additional meal supplementing protein. Moreover, cod is a rich source of vitamins and minerals necessary for the proper functioning of the whole organism. B vitamins and vitamin D support the nervous and endocrine systems. The vitamin B12 contained in cod supports the production of red blood cells. This is why it should be consumed by people suffering from anaemia.

When discussing cod it is difficult to ignore the fact that it has always been a fish of enormous economic importance. Its history is described in detail by Mark Kurlansky in his book "Cod. The fish that changed the world". Atlantic cod played a role, for example, in the long voyages of the Vikings, who explored the Atlantic and reached American shores, settling briefly in Newfoundland a few hundred years before Christopher Columbus. The English and Basques, attracted by the abundance of fish, probably also sailed there in the Middle Ages. However, they were keen to keep the locations of their abundant catches secret. More recently, in the 1950s and 1970s, there was a series of confrontations between Iceland and Britain, known as the Cod Wars.

Today, cod fishing in the Baltic Sea is the subject of much debate. Cod roe requires cold and salty water, in which it does not sink to the bottom. The Baltic Sea, on the other hand, is fed by an enormous amount of fresh water, flowing from a catchment area four times the size of the sea itself. The saltwater in the Baltic comes only from the North Sea, but the rhythm of its inflows has been disrupted in recent years due to climate change. Because of this, and because of the phenomenon of overfishing in earlier years, the cod population in the Baltic is finding it increasingly difficult to recover. This has led to a ban on targeted fishing for Baltic cod from 2020. The fish that currently reaches the market may come from bycatch and so-called traditional small-scale fisheries.

As Naturally Baltic, we support the efforts of scientists and fisheries management organisations to restore the stocks of this valuable species of the Baltic Sea to a size that will preserve it for future generations. We spread the idea of fishing with respect for natural resources and the balance of the Baltic Sea ecosystem. The cod situation is being monitored on an ongoing basis. The next guidelines will be presented by the Council of the European Union on the basis of current observations and conclusions, out of concern for the species' population.

Check out the dorsza recipes