Salmon is a noble fish with fatty, delicate meat with a distinct flavor that almost melts in the mouth. It is excellent as appetizers and snacks, great in exquisite and complex dishes of almost all world cuisine. It tastes excellent when fried, baked, smoked or served raw. 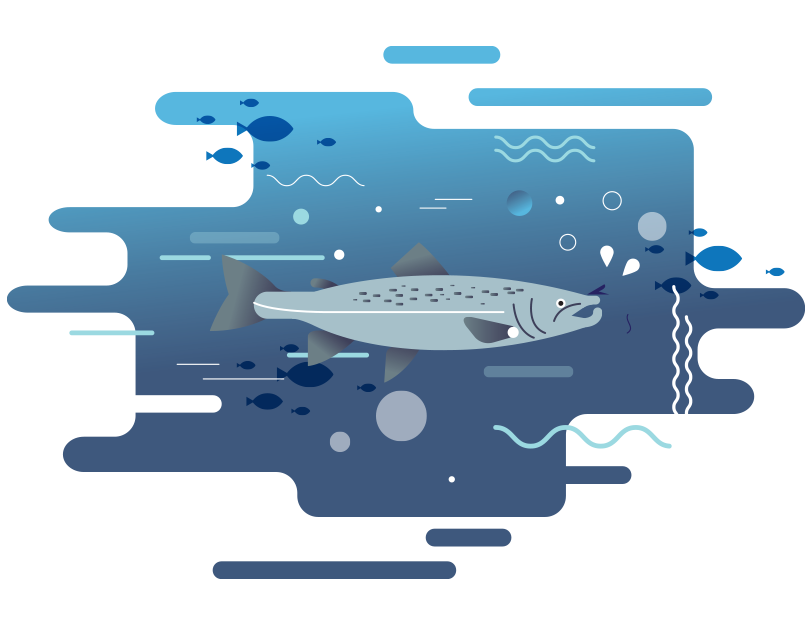 Salmon is the name for several species of fish in the salmonid family. In general we can divide them into Atlantic salmon (species Salmo salar) and Pacific salmon (of the genus Oncorhynchus). Farmed salmon are most commonly found on sale, less commonly wild salmon. Baltic salmon is the term for salmon found wild in the Baltic Sea.

In the shops, however, it is worth looking for the wild variety of salmon. Why? Fish from fisheries are usually characterised by a much better taste and, above all, a higher content of valuable nutrients. This is due to the conditions in which fish are raised in aquacultures. Intensive growth, unnatural diet and lack of exercise mean that farmed fish contain far fewer nutrients.

At the same time, it is important to know that Baltic salmon is a limited species, with strictly defined fishing quotas. In connection with the limitation of its resources, these limits are being reduced from year to year. If you have problems with obtaining this valuable species, it is worth reaching for salmon from ASC-certified farms that undergo independent inspections, such as the Polish Jurassic salmon, which is farmed in crystal-clear geothermal water.

Wild salmon, like sea trout, are a bi-environmental fish. This means that it migrates from the sea to rivers to reproduce. Hence the humorous saying that salmon are the most stubborn fish in the world. It has to travel a long way upstream to spawn. Thanks to its excellent olfactory memory, it chooses as its spawning site the exact stream in which it was born!

Young salmon remain in rivers from one to three years. The annual fry are characterised by 8-13 visible spots on the sides of the body. In their third year, as silvery smolts, they swim down to the sea to feed intensively, reaching lengths of up to 150 cm and weights of up to 39 kg.

Salmon can be found in almost all cuisines around the world, in many different forms. From the most popular ones, such as sushi or grilled and fried fillets, to local specialties such as laxpudding or smörgåstårta, prized in Sweden. Apart from its name, laxpudding has nothing in common with pudding. It is a kind of casserole made of potato slices layered with fresh salmon, dill and cream. Smörgåstårta, on the other hand, is basically... sandwich cake. It is also popular in Estonia and Finland. Not enough? How about pickled salmon, whose only patented and reserved recipe in Europe comes from Poland, specifically from Kamień Pomorski. And this is just the tip of the iceberg of what you can prepare from salmon.

If you choose hot salmon, it is worth remembering that its delicate meat does not require long processing. It can be boiled, baked, grilled or fried. There are many options, so it is worth experimenting in search of your favourite taste.

Wild salmon is one of the fattest fish. Due to its high fat content (over 13%), it is an excellent source of omega-3 fatty acids. Salmon meat is also characterised by a high content of easily digestible, complete protein, containing essential amino acids. It contains many vitamins, including vitamin D, which is found in other foods in small amounts, and vitamins A and E. It is also a good source of B vitamins, including B12 and folate. It also contains many valuable minerals, such as potassium, phosphorus, magnesium, iodine and selenium.